Sorry about the silence lately, we have been having issues with our blog host, and poor Grant has spent hours with “live chat” customer support, and anyone else he can get a hold of. Eventually I think we have it figured out,but wish it hadn’t been such a hassle for him. Oh well. Starting in January, I have been trying to do a better job of not wasting food, not going grocery shopping more than 2 times a week, and having an actual meal plan. It is very easy to make a meal plan,but it actually takes you sitting on your butt, writing it out, and shopping for those ingredients. Even though I have been doing a weekly meal plan, we haven’t eating these things each time, but I figured why not share them since I am already doing all this work. 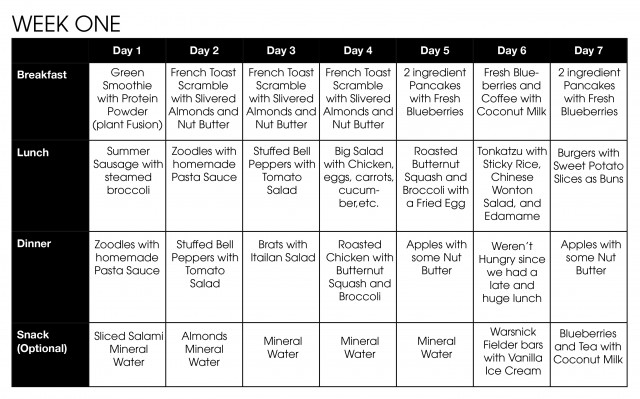 Here is my Week One Menu, we have been trying to eat a lot more fruits, vegetables, and meals that don’t focus completely on the carbs. As you can see a few dinners were Apples with nut butter, this isn’t because we are starving ourselves, we were just eating such good full meals the rest of the day, that we honestly weren’t that hungry. So below are links to as many of the recipes as I have. 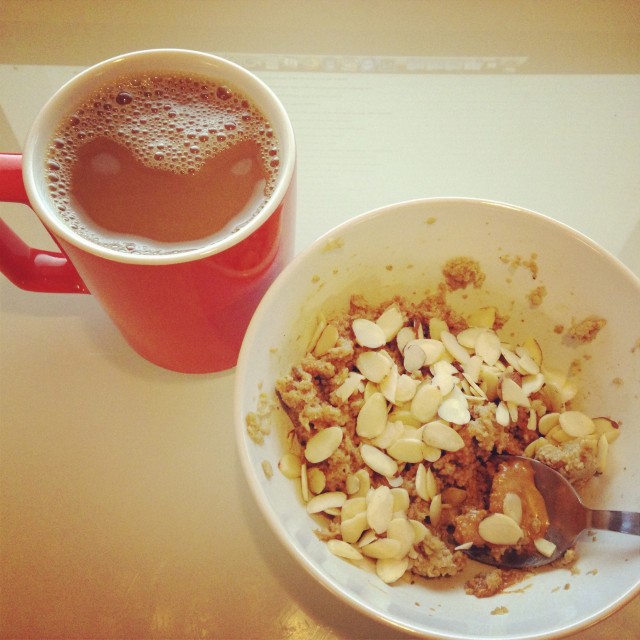 I have still been drinking coffee, but I have gotten used to drinking it with only unsweetened coconut milk in it, and NO SUGAR which is huge. (Also, I might add my coffee was happy to see me!) Â I like my sweets a little bit too much, and so I have been trying to cut it out and just eat real fruit instead.

I have been loving this French Toast Scramble Dish, and just keep making it because I love how it tastes. I add nut butter, and slivered almonds on mine most days, but sometimes add fresh berries too. I do however leave out the honey because I just don’t feel it needs it. 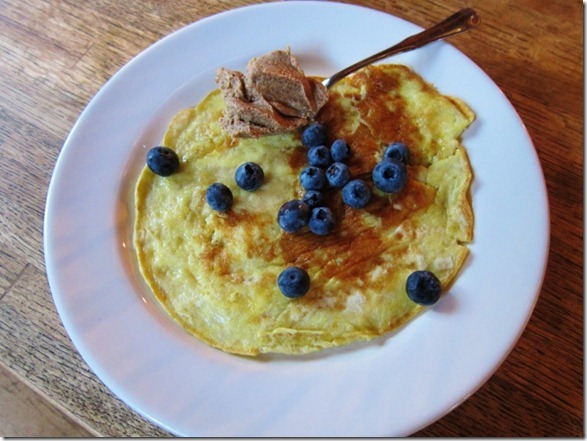 These 2 Ingredient Pancakes have also been amazing! I made mine with blueberries in the batter which turned out so good that I didn’t add anything else to them, but it did make it harder to flip. 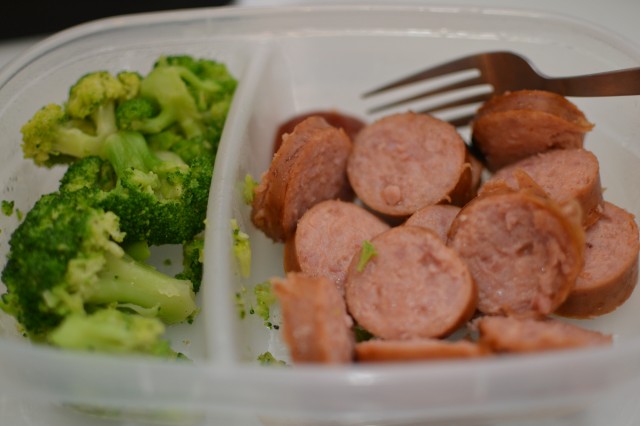 Summer Sausage with Steamed Broccoli – For a quick and thrown together lunch, I steamed Polish Kielbasa sausage(half for Grant, half for me) and cut into tupperware, then put frozen broccoli into a different tupperware with Seasoning. Then when we microwave the veggies at lunch time, they are perfectly steamed. 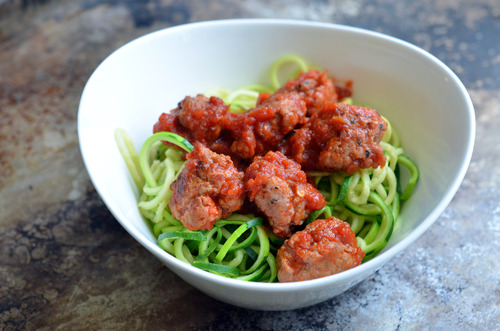 I make Zoodles which Grant and I both prefer to Spaghetti Squash in most “pasta” dishes. This post shows how to make them. I then make my Homemade Spaghetti Sauce with them. If making for a lunch, don’t precook the Zoodles, just slice and put in tupperware, they will steam while heating up the dish later. 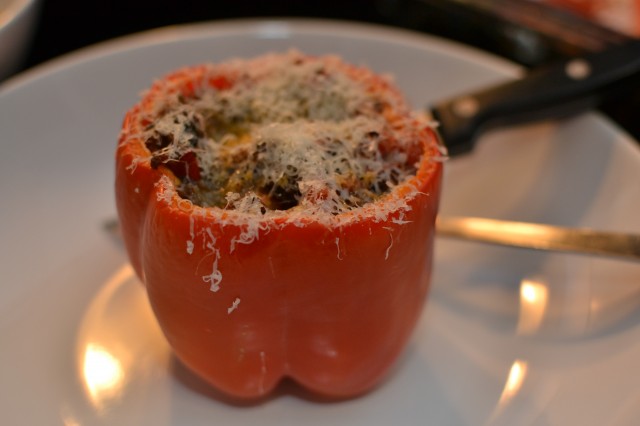 These stuffed peppers are really good, I actually have been chopping the peppers into the dish so it is more like a casserole since Grant prefers it that way,but it doesn’t have to be done like that. 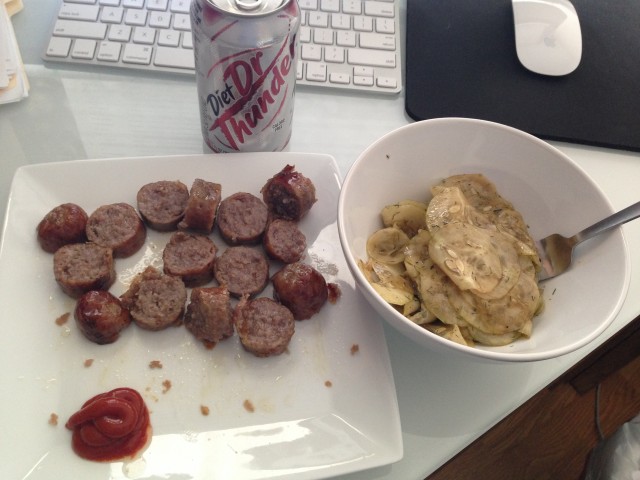 This is an old picture, so we are not drinking pop right now. Â Brats with Salad – for Brats, we normally just buy the “Beer Brats” from Walmart and fry them in a skillet for dinner, and I made cucumber salad with it. 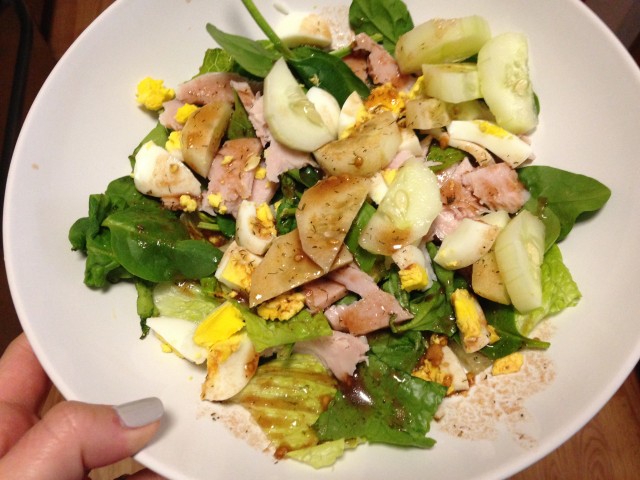 Big Chicken/Turkey Salad – I just had mixed greens that I added hard boiled egg, carrots, cucumbers, Â homemade dressing, and when being lazy this lunchmeat.Â (I added the carrots and tomatoes after taking the picture) 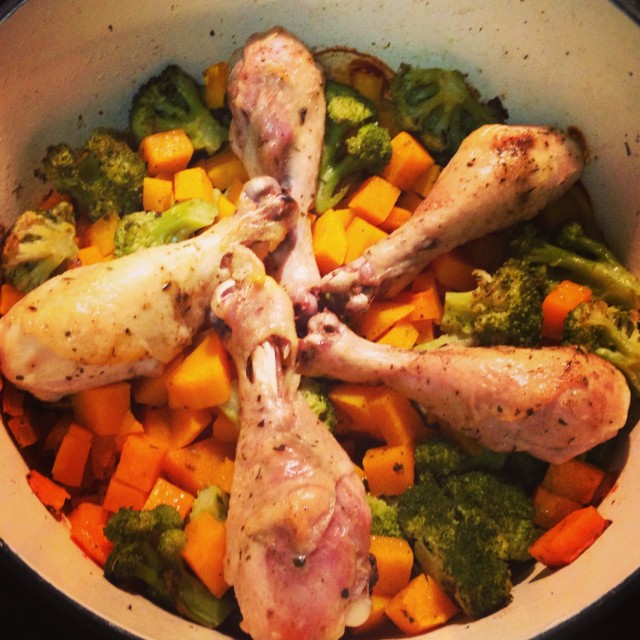 Roasted Chicken with Butternut Squash and Broccoli – This dish is very nice because I pop it in the oven and am done worrying about dinner. We both like it,but Grant isn’t a fan of bone in chicken, but with chicken breast it was on the dry side, so I will probably only bake the veggies as a side next time.

Grant got me addicted to apples with peanut butter, I have never had that before, and really love that as a snack. I have also been drinking more mineral water than normal since I really enjoy it.

We had company over and made Tonkatsu with sticky rice, edamame, Chinese wonton salad, and a dessert which I then packed for Grant to take to work the next day so I wouldn’t keep eating the Warsnick Fielder Bars.

Burgers with Sweet Potato Buns – I followed this recipe to make the sweet potato buns which both Grant and I like a lot, next time I will try the shredded pork on it, but we had burger patties so that is what I used up.

This was the first week Â in January that I shopped one time for the whole week and didn’t shop again until Sunday. It was so wonderful having to not go out again, and I loved having the menu planned so there was no guess work on what we were eating for dinner.

Have you tried any good recipes lately?