During the third week/weekend in June, I was able to go to Houston to help my mom and sister in law with my nieces and nephew. My sister and her husband were on a trip for their anniversary, and this was an AWESOME excuse to get to see all of my nieces and nephew. I hadn’t seen them since we moved in October, and that is a long time! The last time I held Jonas he wasn’t even sitting up by himself, and now he is walking and starting to say some words!!! The trip there was awesome, and Sarina was really nice in picking me up for the airport. Â I tried to take a lot of pictures, but as the week wore on got lazier… sorry! 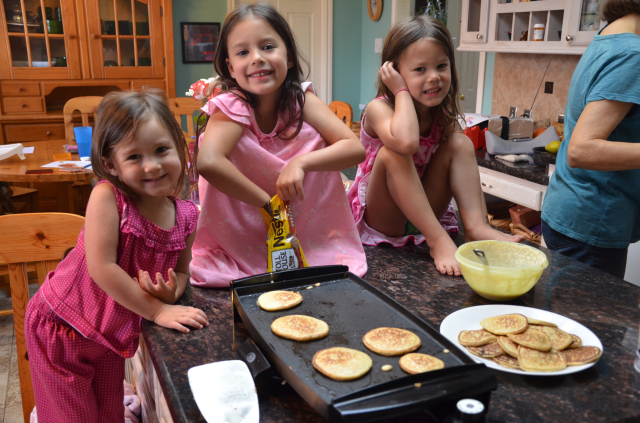 Tanya seemed really worried that the girls would prove too much,but they were honestly on pretty good behavior. They their disagreements,but honestly, I’m sure if I was sharing a room with three of my sisters now, just as many arguments probably would have surfaced. Oh the life of lots of siblings! 🙂 Anyway, Tanya had a ton of food prepared in advanced which made everything super easy. Here is us making some protein pancakes on the first morning I was there, having arrived around 10pm the previous evening. 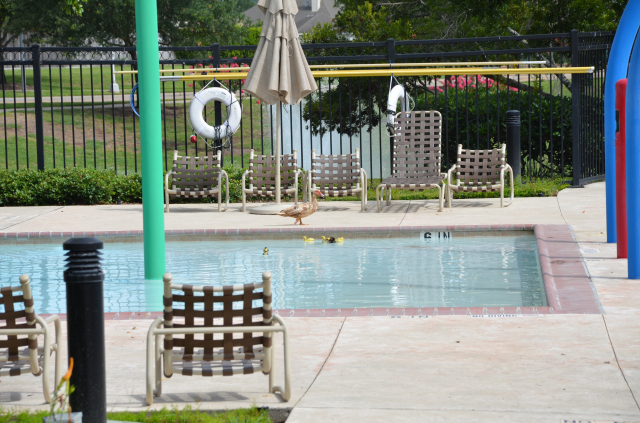 Going to the Splash pad was on the agenda and right before walking there, we passed the pool which wasn’t open yet and got to see these cute ducklings in the pool with their watchful mama. 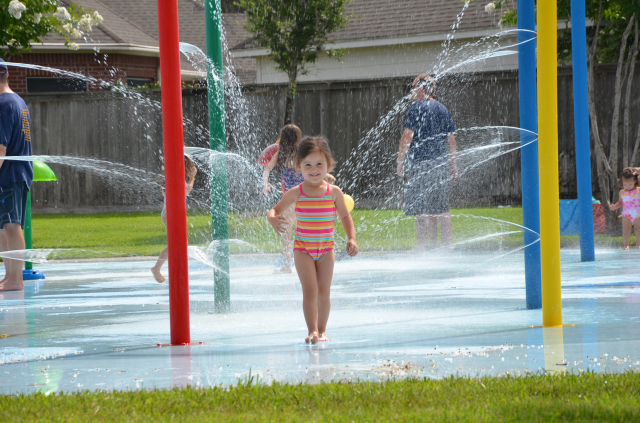 Once at the splash pad, it took a little bit to get the girls in because Hannah wanted a snack, so of course did the girls,but once they were in they had a blast. 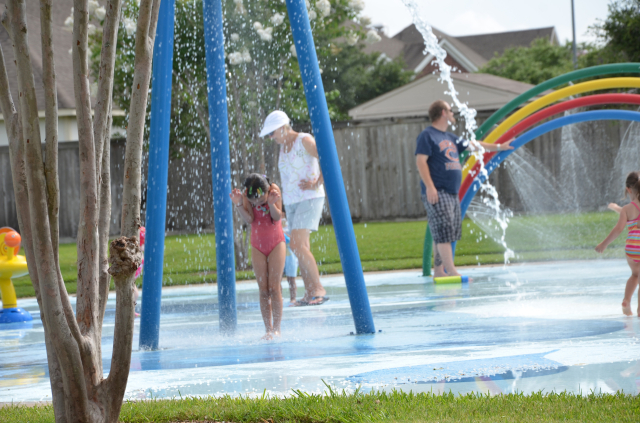 Mia under one of the falls. 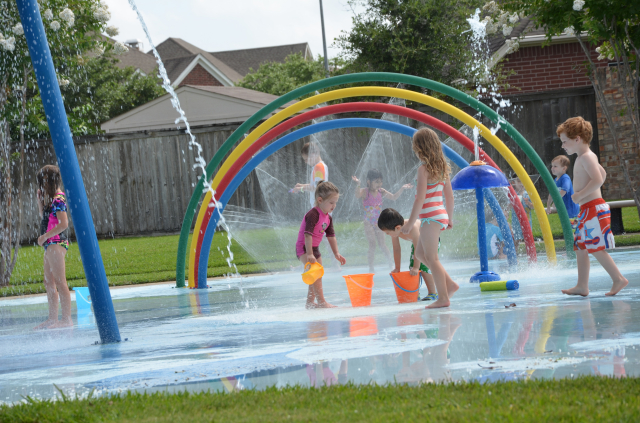 Hannah playing with some of the other kids, including Sydney and Nicholas who were friends from church. 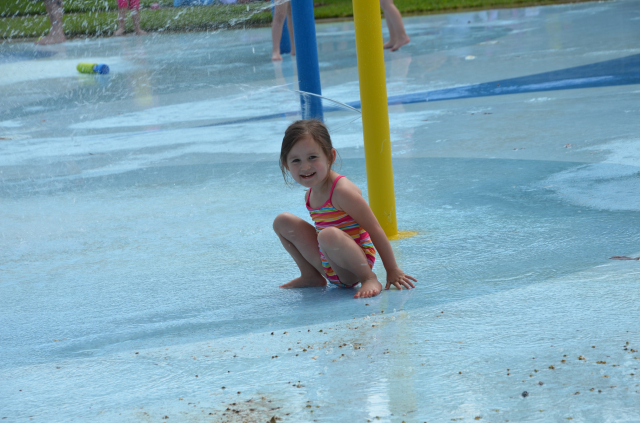 Emi being a goof ball. 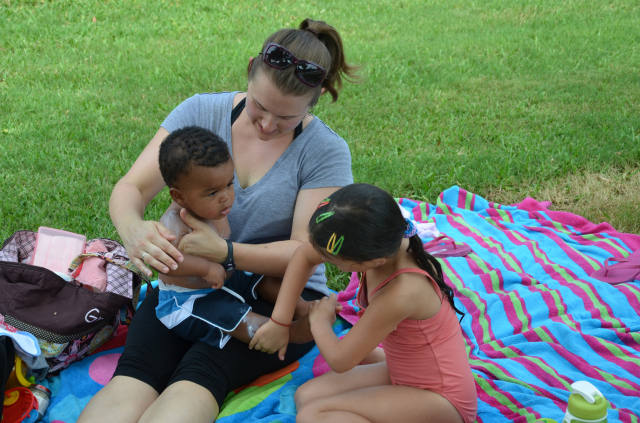 Mia is always the helper and very aware of Jonas at all times. He was getting impatient to be in the water; so Sarina and Mia were helping lotion him up. 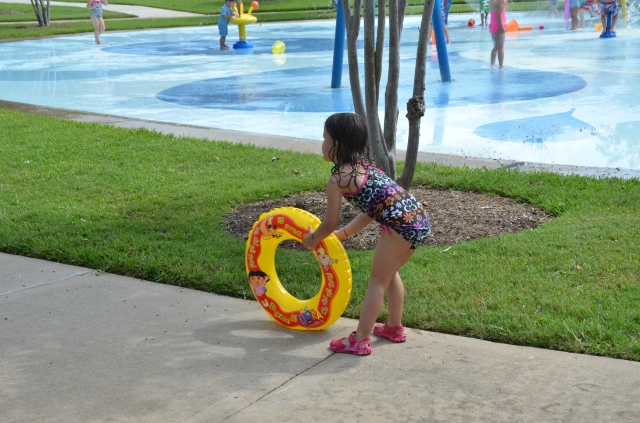 Honestly, I didn’t get many pictures of Ally because she was literally everywhere running around and playing. 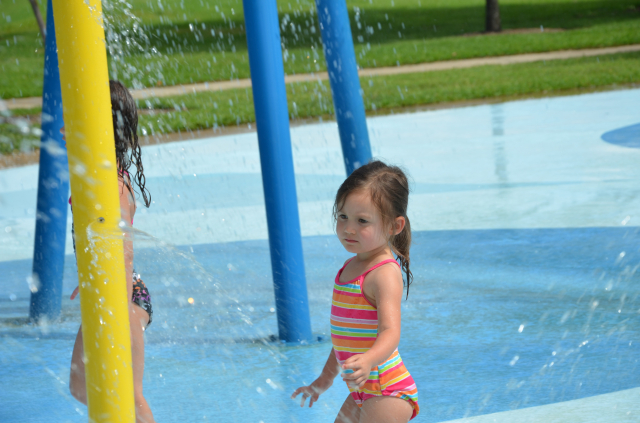 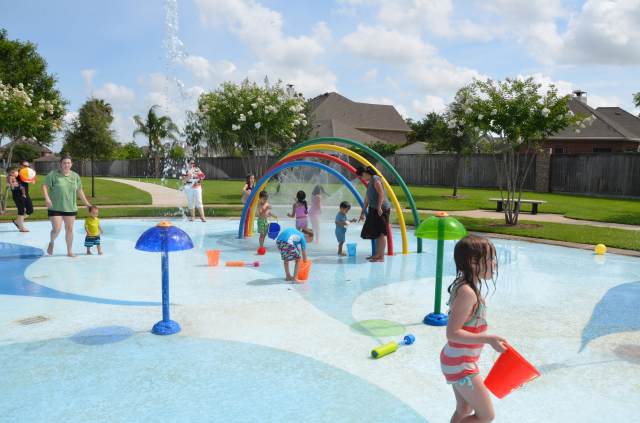 Just a larger view of the portion of the splash pad.

Jonas wanted to be independent and explore,but his sisters only allowed that for about 30 seconds. 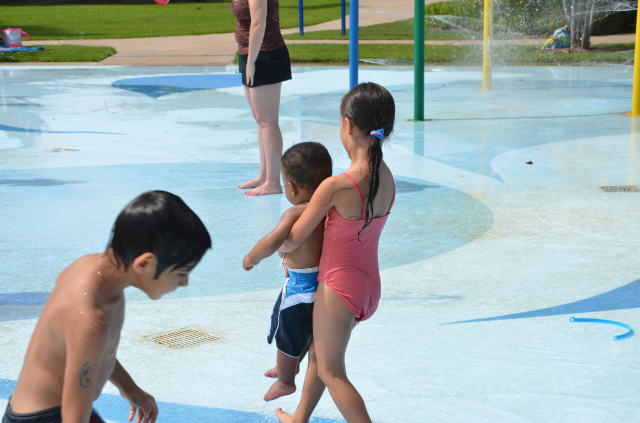 First Mia carried him around to whatever she wanted to show him. 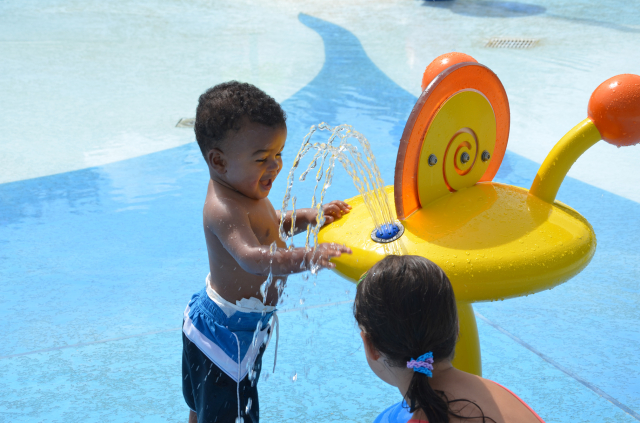 Jonas LOVED this toy that was slowly gurgle water and the jet it out! 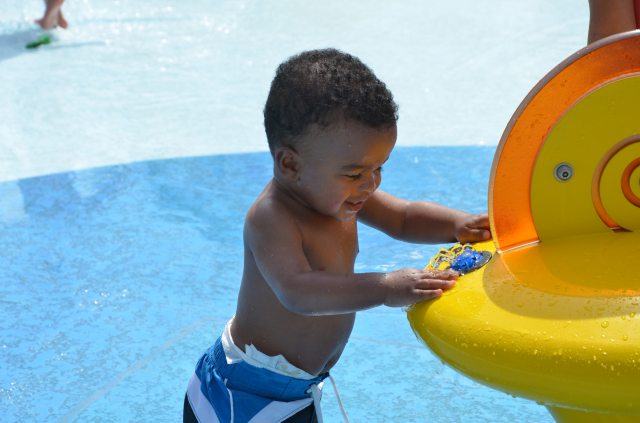 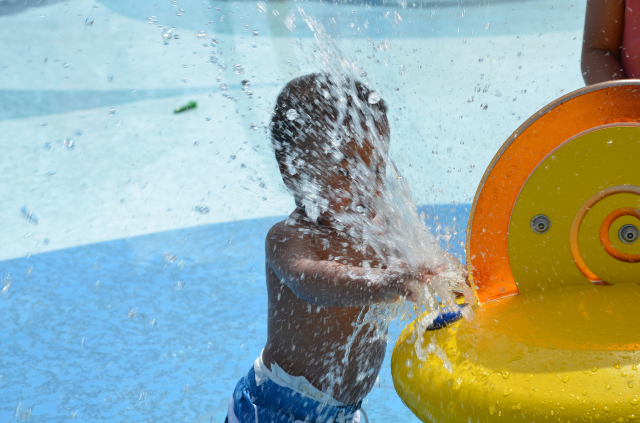 He is not afraid of water which makes everything more fun! 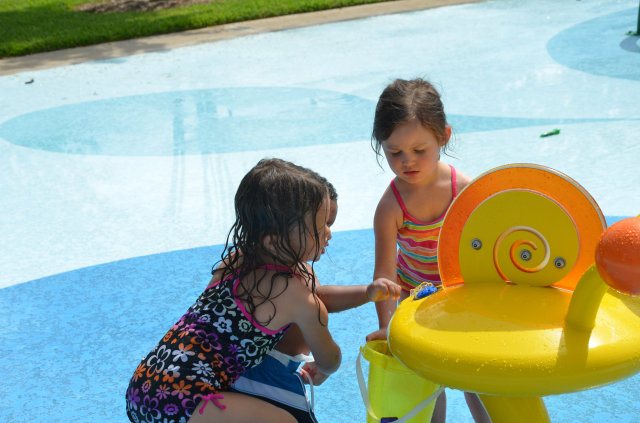 When Mia wasn’t carrying him, Ally was. 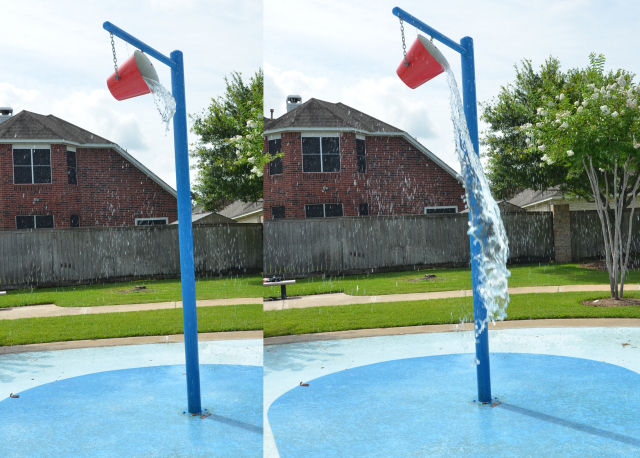 A fun bucket that would fill with water and randomly dump on anyone below. 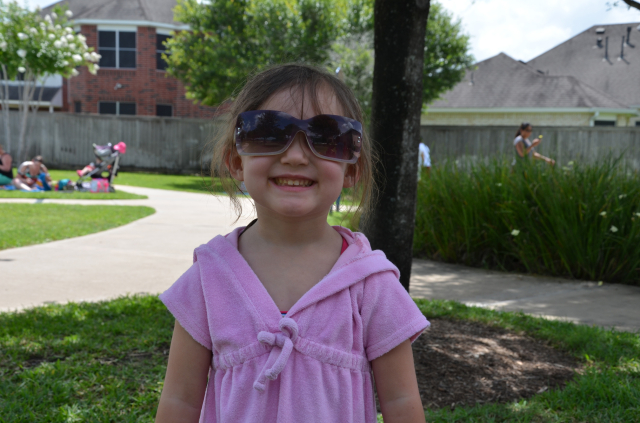 There were a lot of gnats that kept diveÂ bombingÂ our eyes, and Emi did NOT like it, so she wore my sunglasses as protection from them.

The next day, on Saturday we met Daniel and Sarina at the pool for half the day at their neighborhood to swim. I didn’t get a chance to take pictures because honestly we were just running after all of the kids making sure everyone was happy. Nikolas was a great help too. Almost every day I took the girls on a walk with the dogs. We ate at Daniel and Sarinas a few times for dinner with sharing the meals as well. 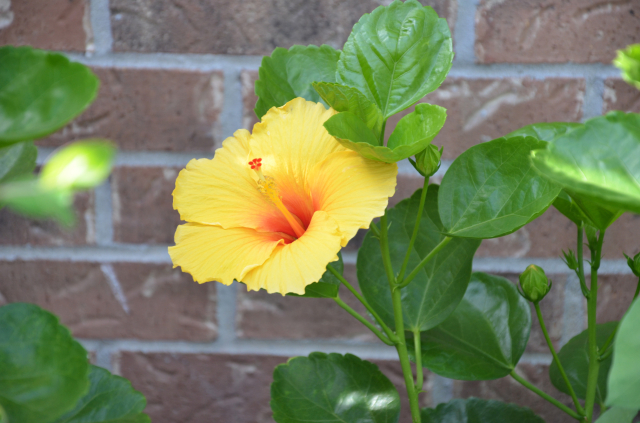 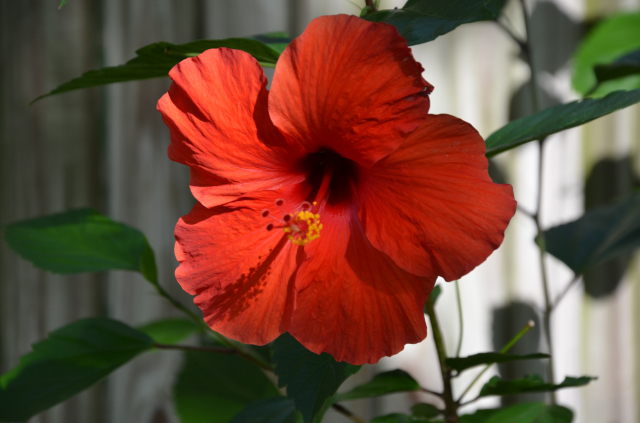 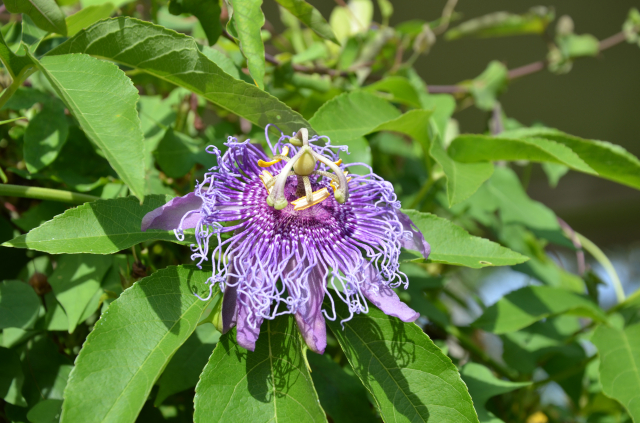 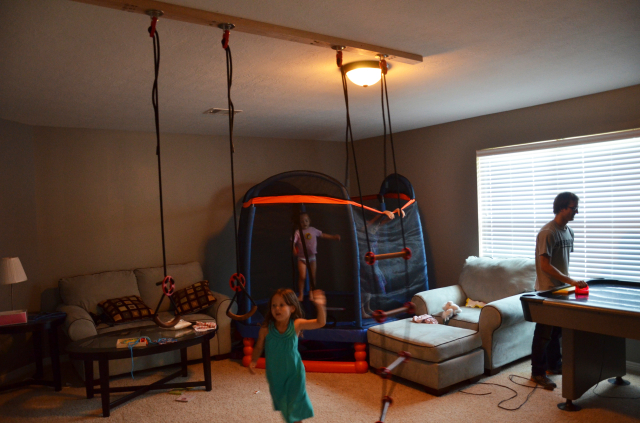 I hadn’t been up to Daniel and Sarina’s Game room in a LONG time, and so they have these cool toys to play with now. 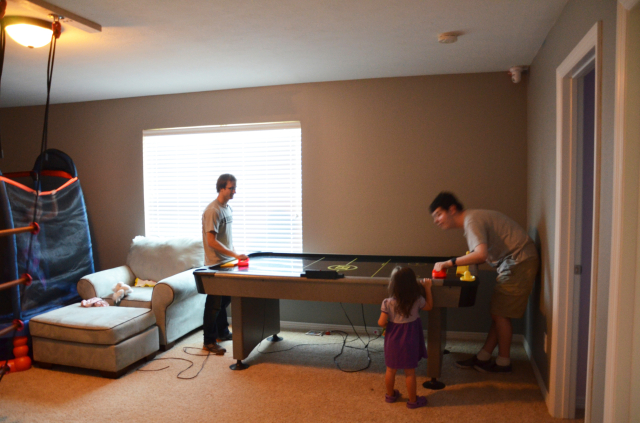 A recentÂ acquisitionÂ here was a air hockey table that Daniel got on craigslist for free, he only had to replace the wall plug which had been chewed off. 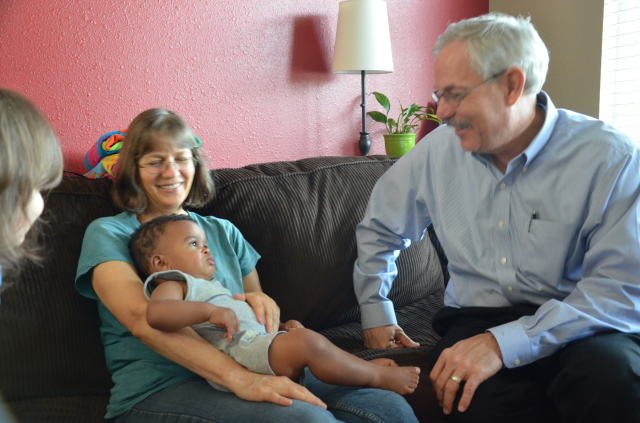 This was Friday night’s dinner at Daniel and Sarina’s House. Jonas was homesick; we could all tell. Papa tried to cheer him up as much as possible. 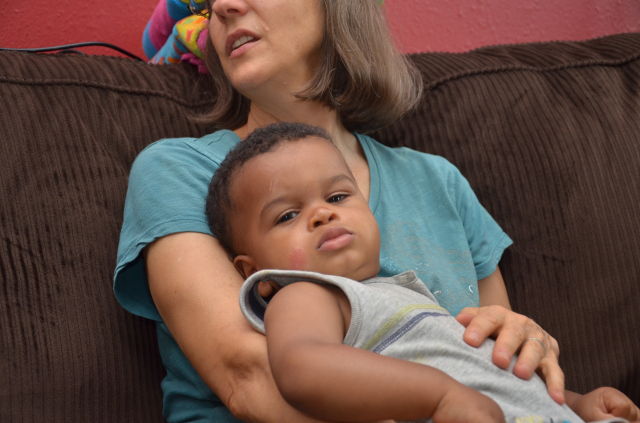 But the poor little guy was just a little down.

As I mentioned above, Saturday we mainly did the pool, and also went and got tasty Mueller yogurt which I had coupons for. So we all got to try their different flavors for free. The girls loved the yogurt with the choco balls the best, go figure. Â Then Sunday was father’s day, so I was able to give my gift in person to Papa which I hadn’t been expecting. After church, we made schnitzel at Papa’s request and ate angel food cake with berries and whipped cream. Everyone but me had dinner at Daniel and Sarina’s and the girls got toÂ FaceTimeÂ with their parents which cheered Jonas up a ton. I got to meet a friend and coworker from Austin, Beth, who happened to be visiting her family at Papadeuxs for dinner. I had never eaten there before, and their stuffed shrimp was amazing.

Monday started VBS for the Mia and Ally, and Emi got to spend some quality time with Oma for an hour or two. Then Emi got to have a personal play date with Hannah and Jonas at Sarina’s house. I rushed to Panera to eat lunch with another friend, Kara, who recently moved to Sugarland so that was fun. Once lunch was over Mia and Ally were back from VBS so I picked them up and took them to Baskin Robbins to get some ice cream. Mia picked mint chocolate chip and really liked it while Ally got rainbow sherbet which she too enjoyed. For Hannah and Emi I got vanilla ice cream with M&Ms on the side. I picked up a few scoops for myself and Sarina and dashed to Sarina’s house so the ice cream wouldn’t melt. All the girls finished their treats, and then it was time to head back to Oma and Opa’s house.

Tuesday was a crazy rush. We got the girls ready to go to VBS, I said goodbye to Mia and Ally. Mama took Emi along while she dropped off the girls and then went shopping for groceries. Sarina came over and dropped Hannah and Jonas off with me while I finished packing and getting ready for my flight back since she had a doctor’s appointment. Then right when my mom got home from shopping with Emi, I was packed said my goodbyes, and Julia and I drove to the airport. I do know the girls had plans to make ginger bread cookies that night and make cheesecake the next day as a surprise for their Mama.

Sadly, I have an amazing talent whenever visiting to miss people by hours. The day after I left, Tanya arrived to eventually get the kids, and Raya got back from Africa, but I Â missed both of them. Hopefully I will get to see them both at least at Christmas if not earlier. 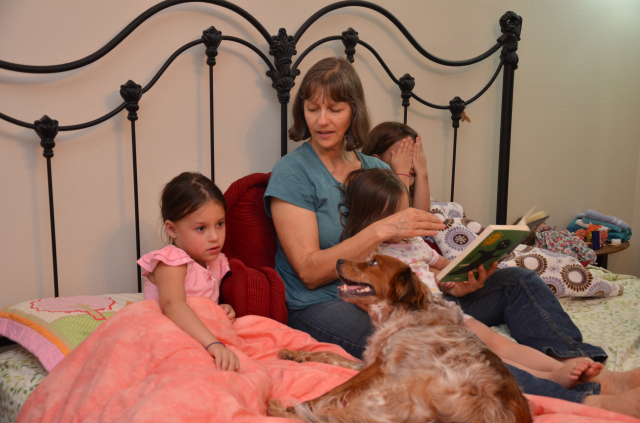 Here you can see jumper with the girls. He is a great dog, and LOVES being petted so when the girls had their nightly story time with Oma, Jumper tried to join in. 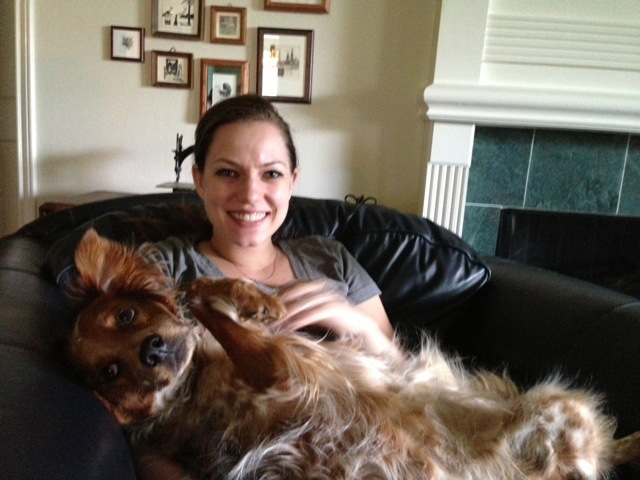 Mia took this picture for as Jumper and I were BBFs as you can clearly see.

This was a fun trip, and I think it made me realize that one day, I might be able to handle parenting. I loved getting to see family and some friends as well. It is always such a huge blessing to be around my nieces and nephew, and I am just so proud of what great kids they are growing into. Grant was super glad to see me when I was home which was also nice. He claims I have spoiled him with food too much and the bachelor food isn’t as good anymore. 🙂

Boating Trip with the Fleshmans

Brings back memories from when I went to Houston to help with the Robertson kiddos a couple summers ago. So much fun, but exhausting too!

I am so glad you were able to help out and have fun too! Families are so great! How much the girls and Jonas have grown.