The Girl on Fire

So if you have read the Hunger Games books by Suzanne Collins and liked them or even if you haven’t, you are probably aware of the movie that just came out. I am always wary of movies based on books because the books are ALWAYS better and lots of people never read the booksÂ becauseÂ of a bad movie. This movie was great, more below about that below. Here is an excerpt from The Hunger Games which describes her costume so you can see what I was trying to recreate:

â€œSo, Katniss, about your costume for the opening ceremonies. My partner, Portia, is the stylist for your fellow tribute, Peeta. And our current thought is to dress you in complementary costumes,â€ says Cinna. â€œAs you know, itâ€™s customary to reflect the flavor of the district.â€
For the opening ceremonies, youâ€™re supposed to wear something that suggests your districtâ€™s principal industry. District 11, agriculture. District 4, fishing. District 3, factories. This means that coming from District 12, Peeta and I will be in some kind ofÂ coal minerâ€™s getup. Since the baggy minerâ€™s jumpsuits are not particularly becoming, our tributes usually end up in skimpy outfits and hats with headlamps. One year, our tributes were stark naked and covered in black powder to represent coal dust. Itâ€™s always dreadful and does nothing to win favor with the crowd. I prepare myself for the worst.
â€œSo, Iâ€™ll be in a coal miner outfit?â€ I ask, hoping it wonâ€™t be indecent.
â€œNot exactly. You see, Portia and I think that coal miner thingâ€™s very overdone. No one will remember you in that. And we both see it as our job to make the District Twelve tributesÂ unforgettable,â€ says Cinna.
Iâ€™ll be naked for sure, I think.
â€œSo rather than focus on the coal mining itself, weâ€™re going to focus on the coal,â€ says Cinna. Naked and covered in black dust, I think. â€œAnd what do we do with coal? We burn it,â€ says Cinna.
â€œYouâ€™re not afraid of fire, are you, Katniss?â€ He sees my expression and grins. A few hours later, I am dressed in what will either be the most sensational or the deadliest costume in the opening ceremonies. Iâ€™m in a simple black unitard that covers me from ankle to neck. Shiny leather boots lace up to my knees. But itâ€™s theÂ fluttering cape made of streams of orange, yellow, and red and the matching headpiece that define this costume. Cinna plans to light them on fire just before our chariot rolls into the streets.
â€œItâ€™s not real flame, of course, just a little synthetic fire Portia and I came up with. Youâ€™ll be perfectly safe,â€ he says. But Iâ€™m not convinced I wonâ€™t be perfectly barbecued by the time we reach the cityâ€™s center.
My face is relatively clear of makeup, just a bit of highlighting here and there. My hair has been brushed out and then braided down my back in my usual style. â€œI want the audience toÂ recognize you when youâ€™re in the arena,â€ says Cinna dreamily. â€œKatniss, the girl who was on fire.â€ 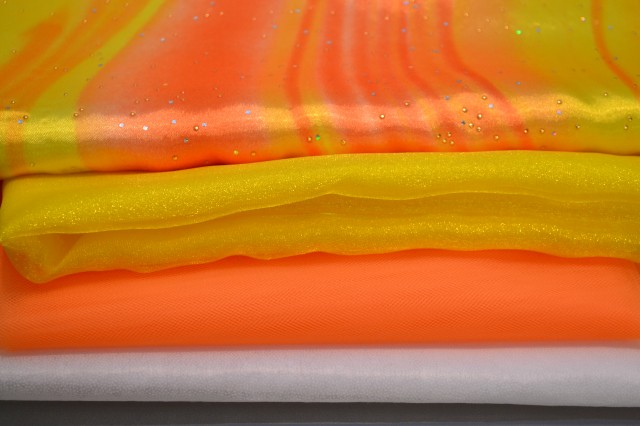 Here is the fabric that I bought for this project from Joanns. I lucked out because the top fabric was a Halloween costume and way cheap! Also, it had sparkles,but they weren’t glitter so Grant wouldn’t throw a fit. 🙂 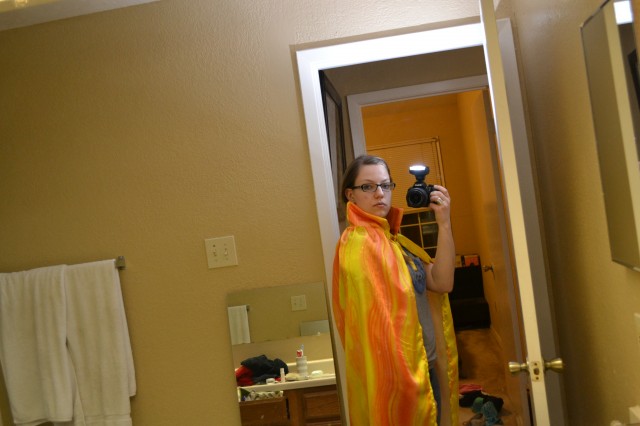 Here is the base to my cape. I used THIS TUTORIAL.Â Sorry about not looking too happy… I was sick and trying to steam through and get this finished in time for the movie. 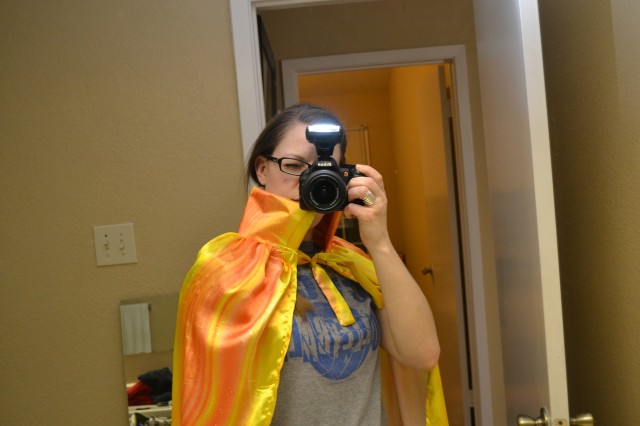 I edited the pattern by giving it this stand up collar with added interfacing to keep it more stiff rather than a cowl. 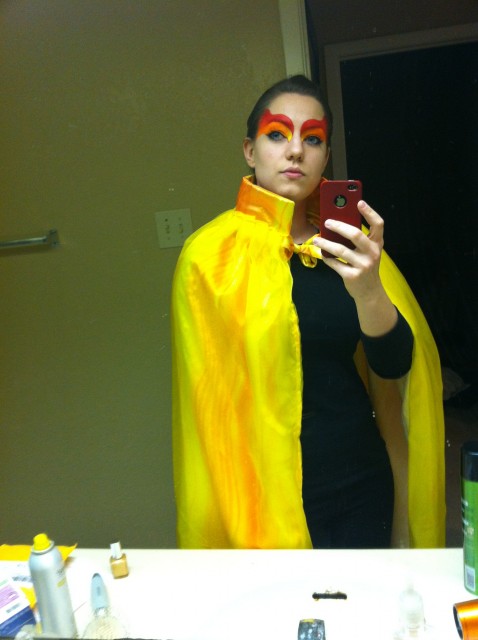 Here is the second layer of fabric on my cape. 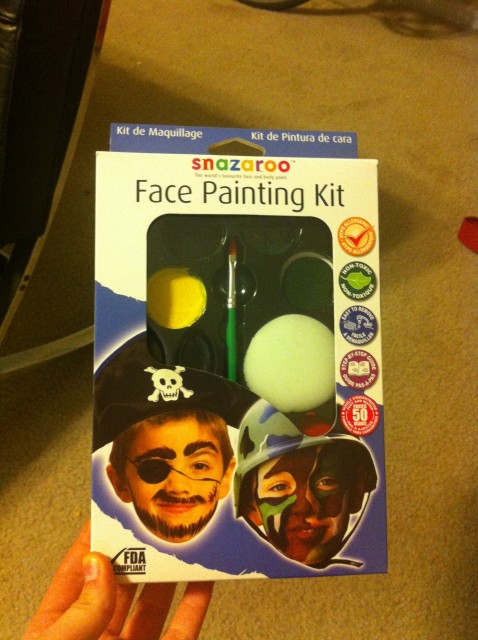 Here is the cheap face paint that I used from Michael’s, since I didn’t want to spend money on MAC makeup to get the same look. 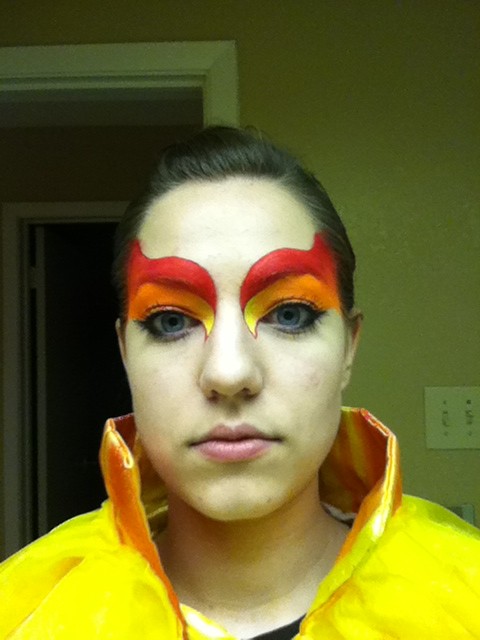 Here is a close up of my makeup. I am happy with how it looked,but it took FOREVER! 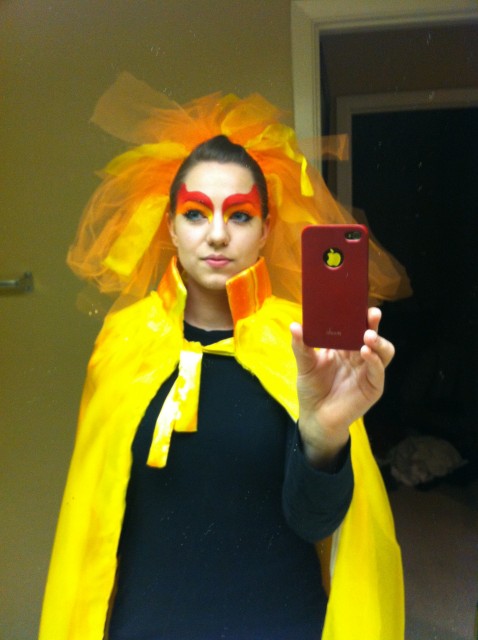 Here is my final costume with the headdress(a partial tutu on my head ;p) 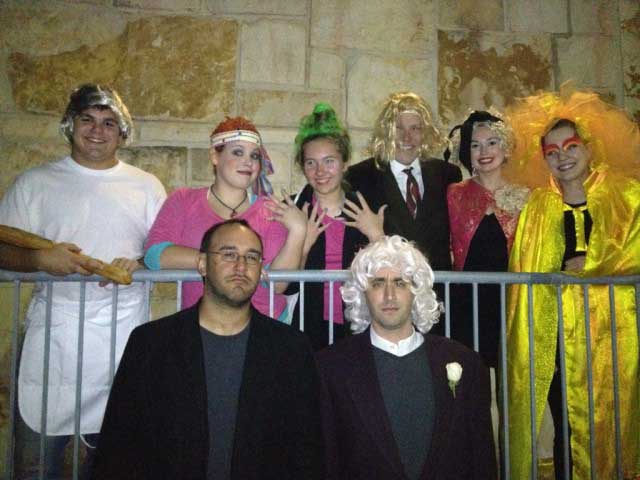 Here is the group that I went with to opening night. All of them are from Church and most of them I work with.

Bottom left to right: we have Christian dressed up as Cinna(he has extra earrings and gold eyeliner on, you just can’t tell, and then you have Dustin dressed up as President Snow.

My thoughts on the movie were that I thought they did a great job with it! All of the actors could act which was a huge plus and they kept pretty close to the book. I know that they weren’t perfect but compared to the Harry Potter Movies, Twilight Movies, and Percy Jackson Movie it was SO much better. I would recommend it to anyone. There are a few sad parts, I am pretty sure no bad language, no nudity, but there is some violence,but they did a great job not showing gore.