Last year for Halloween, we knew that we(as in I) wanted to dress Reese as an Ewok. I already had part of the costume, and so that made me decide to do a whole family Star Wars Theme for our Costumes. I decided this before even knowing that there was another movie coming out. Below are links to the tutorials I followed to make our costumes, and some pictures of the process. 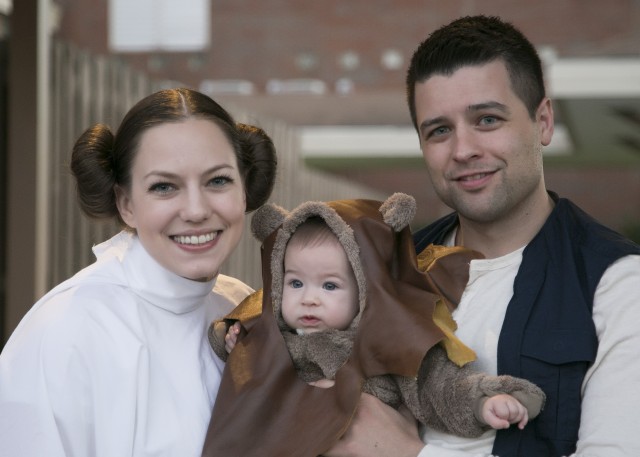 Our final costumes – Princess Leia, an Ewok, and Han Solo. 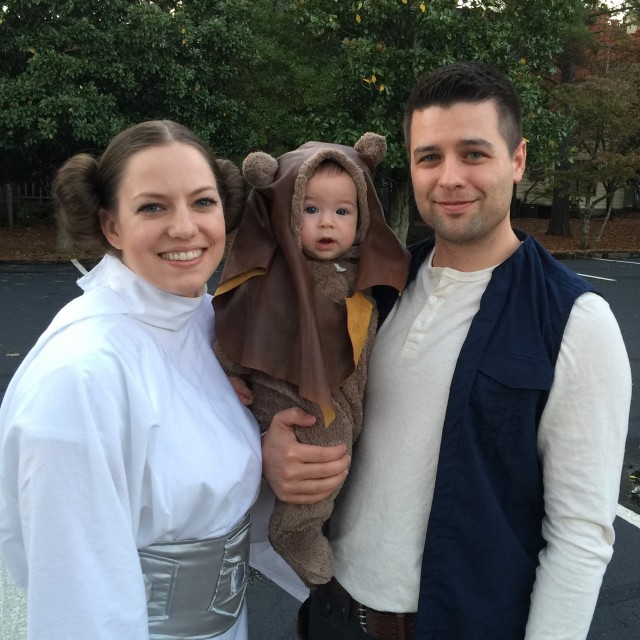 Here is another photo where you can see my belt, and Grant’s Shirt as well. 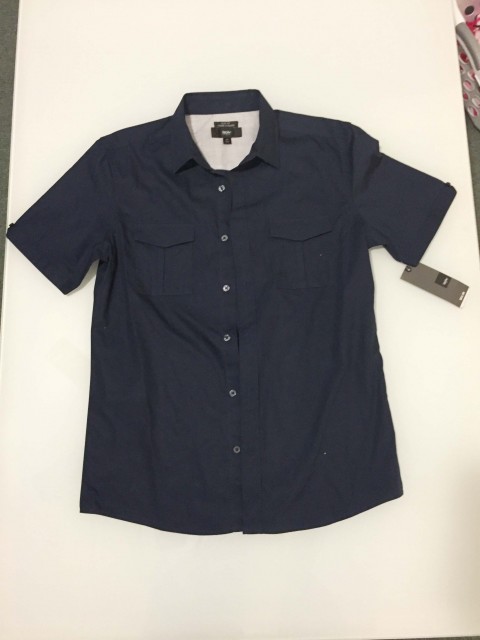 For Grant’s vest, I found this shirt at Target’s Clearance rack. I cut off the sleeves and hemmed them, and then turned the part of the buttons and button holes down and sewed it into place.

For Han Solo’s beige shirt, I ended up finding this Henley Shirt from Target on Sale for $8.00 in beige which Grant can wear during the fall as a regular shirt since I didn’t have to alter it at all. He wore some dark grey pants he already had. I wanted to find him some navy ones,but he wasn’t into that. I then put red duct tape on the sides of the pants, and colored with blue sharpie on them to make the stripes on the pants that Han Solo wears. See THIS tutorial to get the picture. This way there was no damage to his original pants. I also sewed a pair of black “boot” covers for his costume that Velcroed around his legs,but he ended up choosing not to wear them. 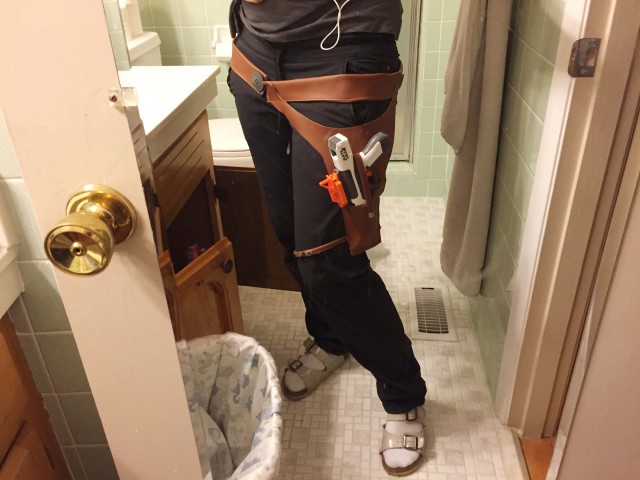 I made the gun holster even if you can’t see it in the pictures above which is why it is looser on me since it needed to fit Grant.

I used THIS  Star Wars nerf gun to fit it, and THIS tutorial on how to make it. With a few slight adjustments after looking online at pictures of Han Solo’s original gun holster. I also added a cover for the button to look more realistic,but these pictures just don’t show it. I found that painted cardboard worked the best after trying a few other options. 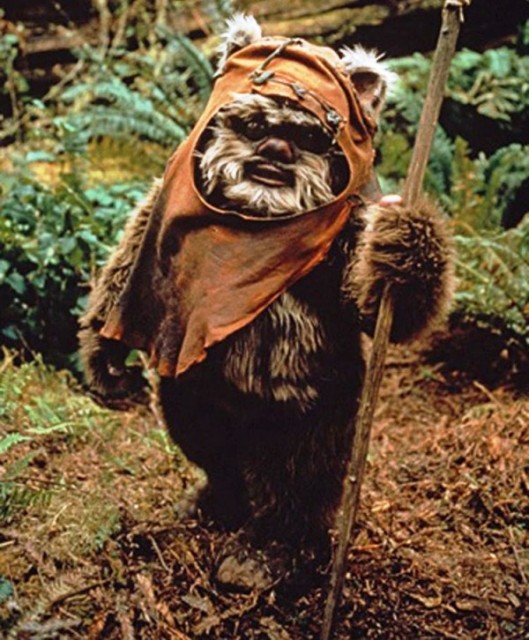 An Ewok from Star Wars for those who haven’t seen the movie… we had a few people call Reese Chewbacca. This made me cringe. 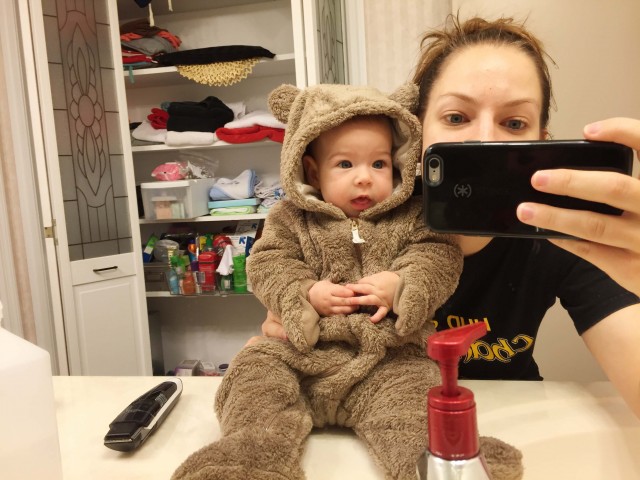 Here is the base to Reese’s Costume. I got this H&M jumper which was nice and warm. It already had ears as well as a little tail. 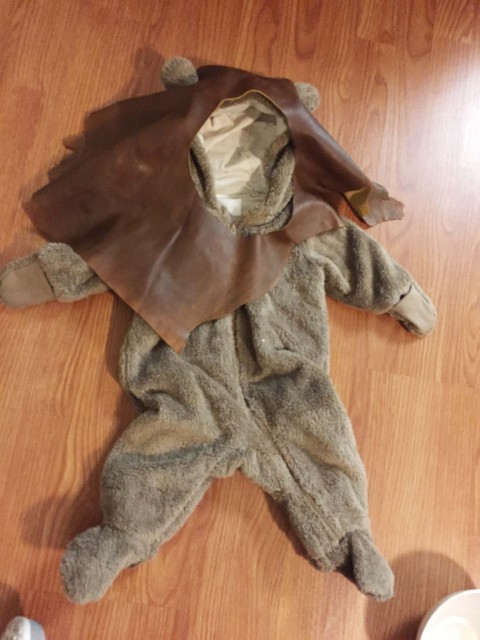 I then took some leather I had bought off of etsy last year, and cut two slits into it and fit the ears through. Then cut the hole for the face. 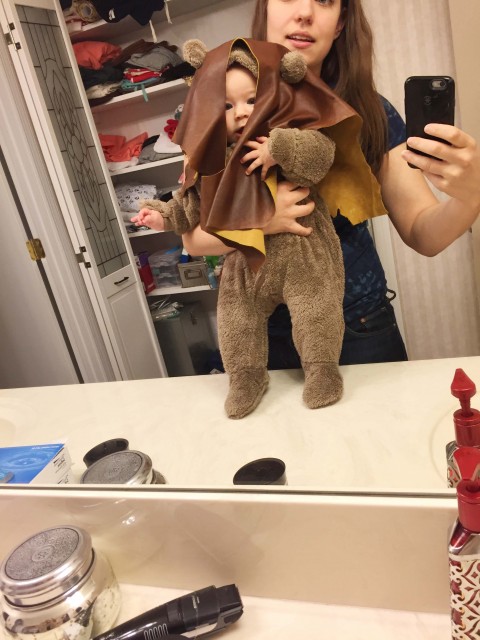 Here was the first fitting. 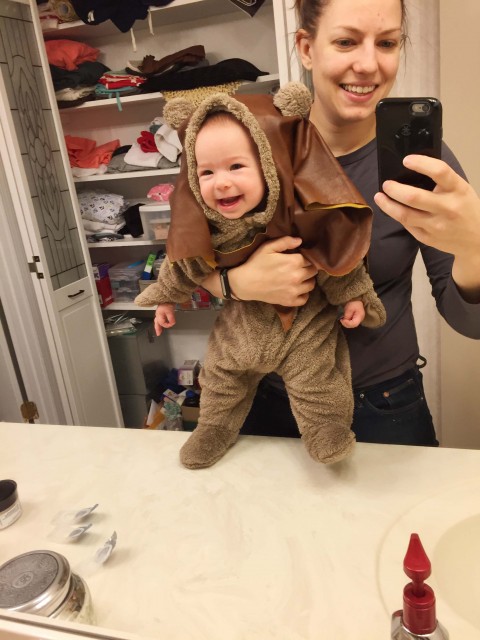 I then hand sewed the leather around the face so that it would stay put. 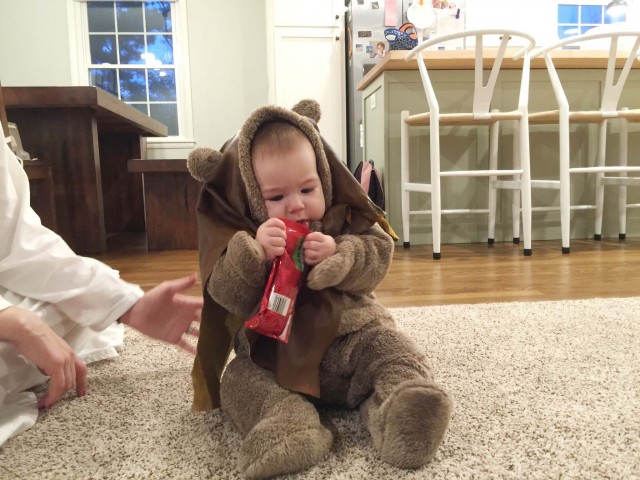 Here is our little Ewok who apparently thinks skittle wrappers are the thing. If she had been older, I would have made her a stick and other accessories to carry around,but she was just too young for those this year. 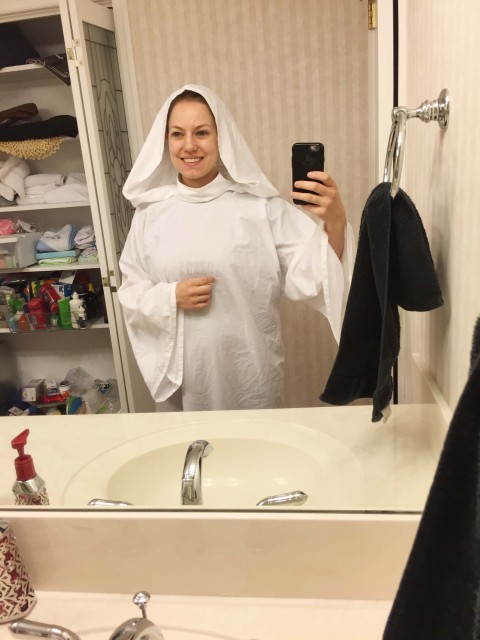 To keep things cheap, I used a white twin flat sheet as the fabric for my costume. 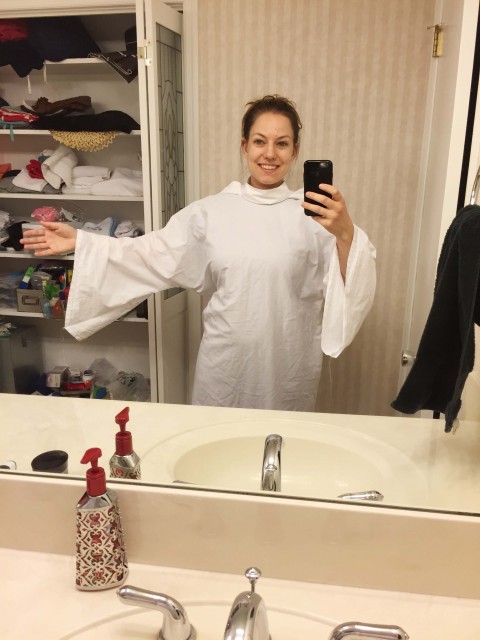 I followed THIS Tutorial. 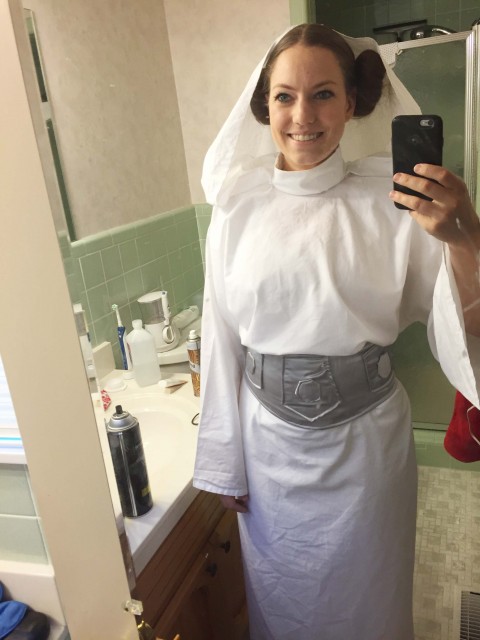 For my belt, I used a silver satin material which was a little hard to work with,but in the end got it to look decent. I used THESE hair donuts to use under my hair. 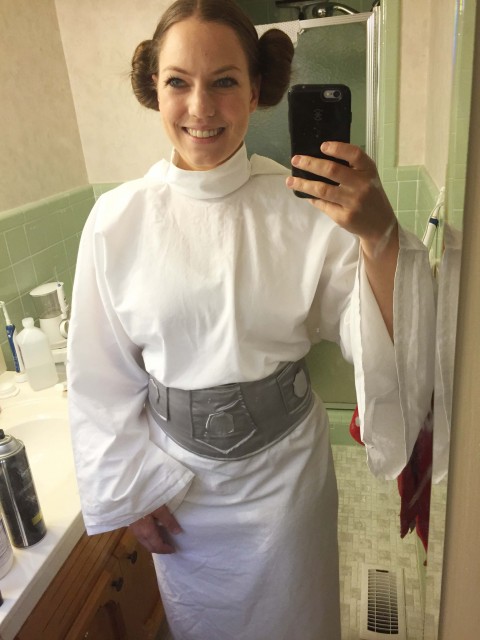 I followed THIS Tutorial,but they used a silver pleather which I wish I would have found instead. 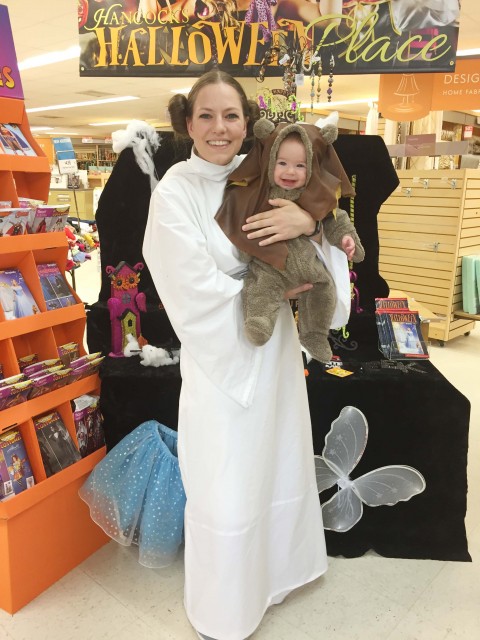 Since Grant was at work, Reese and I entered our costumes into the Hancock Fabrics Costume Contest. Here is the picture they took for our entry. 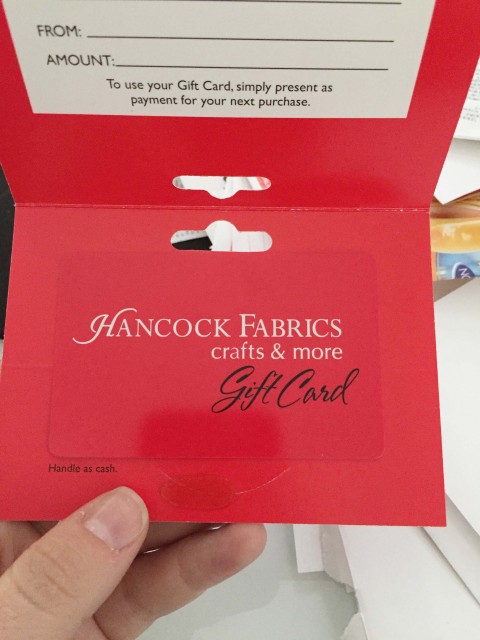 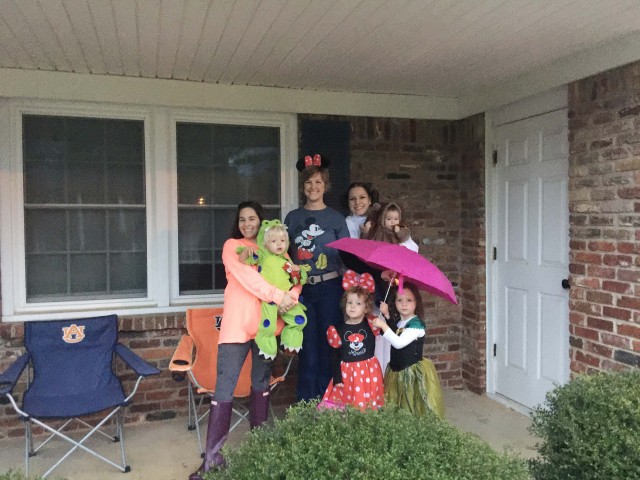 We went trick or treating with our friends in their neighborhood. 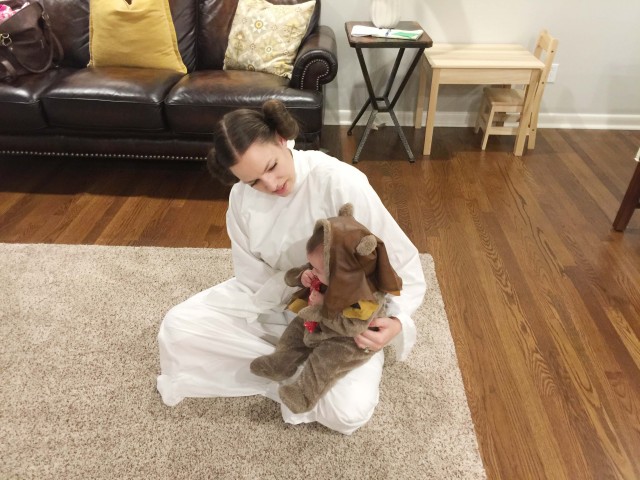 We also hung out afterwards. 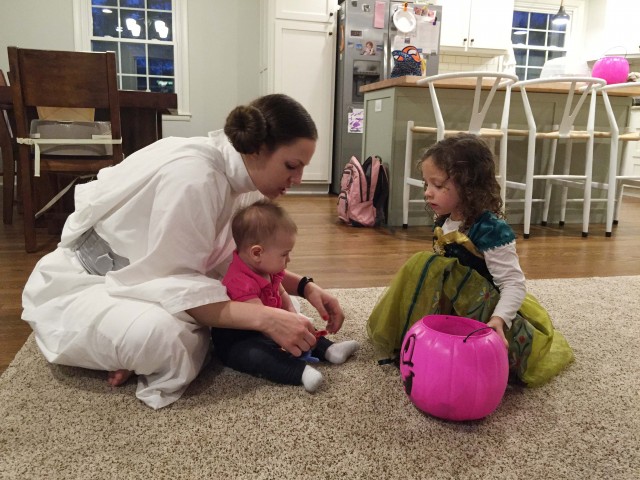 It was so much fun, even when our Ewok wouldn’t stop chewing on the leather portion of her costume.

Then this photo was taken at our Church’s Trunk or Treat. We only stayed for the dinner before hand because Reese goes to bed so early,but it was lots of fun.

If you have any questions about the construction of any of the portion of the costumes, please let me know!

Lord of the Rings Pumpkin

Cloth Diapering on a Budget

I love, “LOVE” these costumes and the Ewok sure does look really cute!