I am a sucker for desserts, so I have been working on making a Keto Marbled cheesecake. The first attempt wasn’t that great, but this second one was really good. I got the surprised look and nod of approval from Grant so that has to be good. 🙂 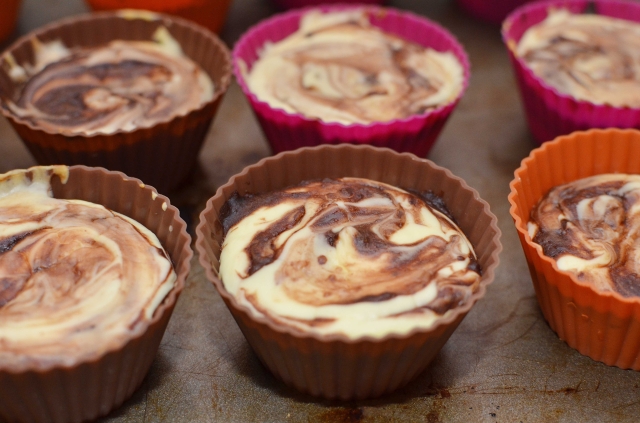 They actually look pretty too! 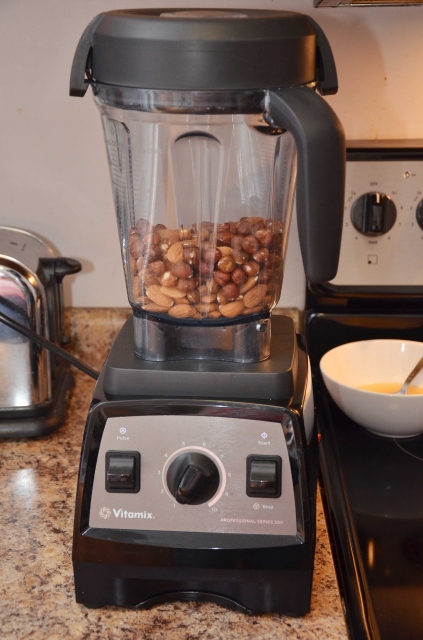 For the crust, I ground up hazelnuts and almonds because I had them on hand, and prefer a more chunky crust, but you can always use almond meal if you prefer that. 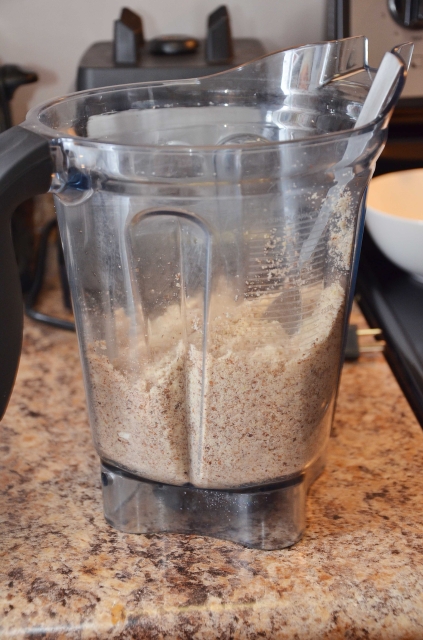 All ground up, and I just put the extra in a tupperware container until I use it up. 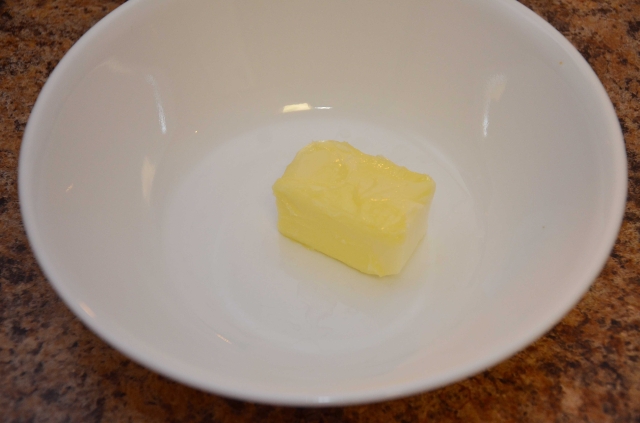 Soften butter for the crust. 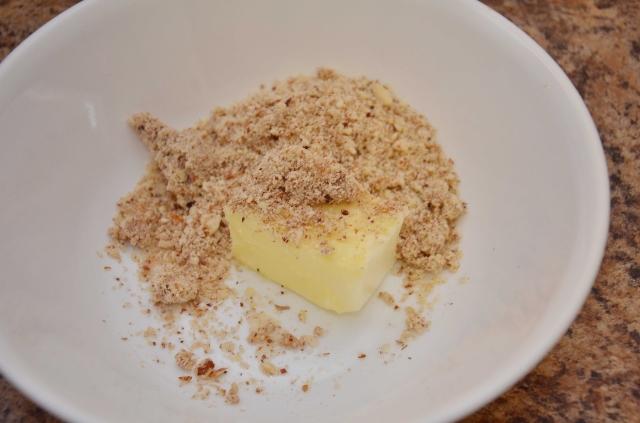 Add the ground up almonds or almond meal. 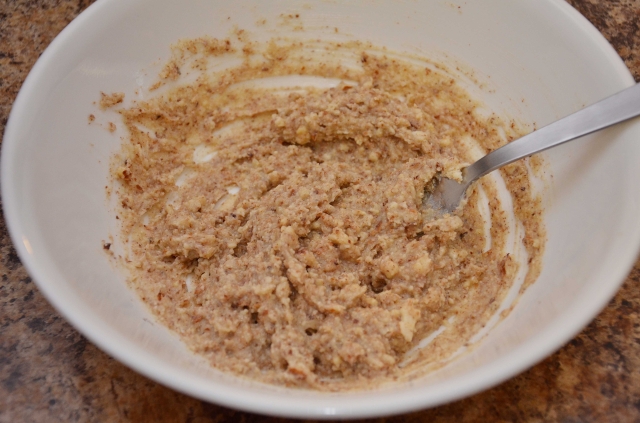 Mix up and set aside. 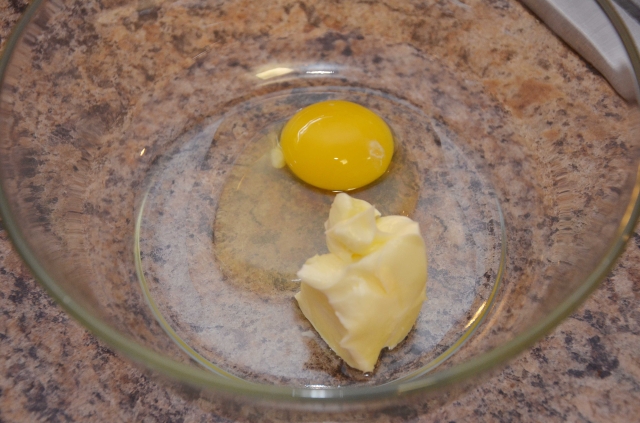 In a separate bowl, make the Brownie “mix” by adding an egg and butter. 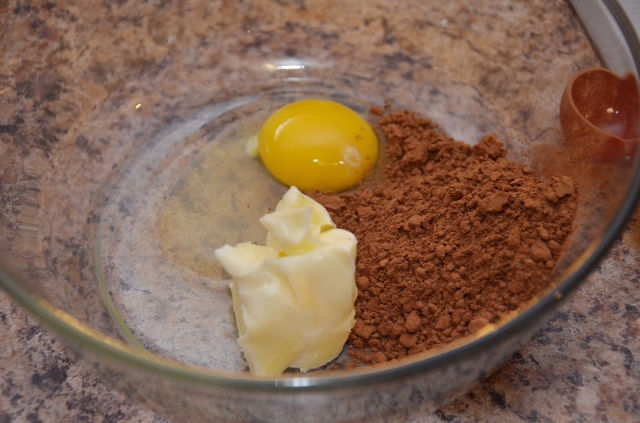 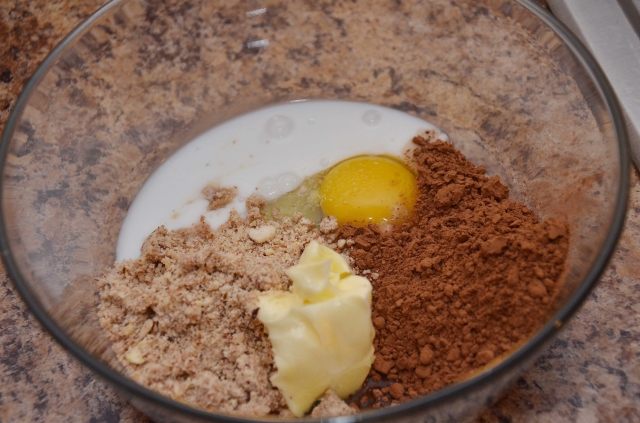 Milk and a little bit of almond meal. 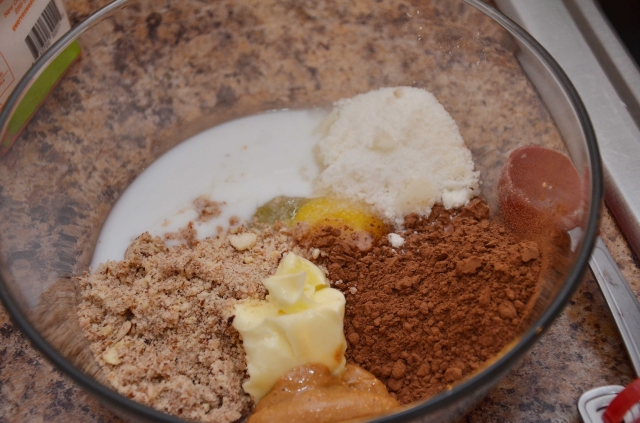 Swerve  sweetener and a little bit of peanut butter. 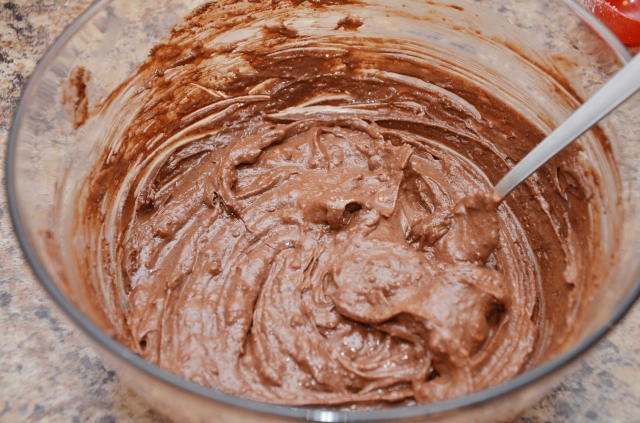 I also added a dash of Waldens Farm Syrup

, then mix well and set aside. 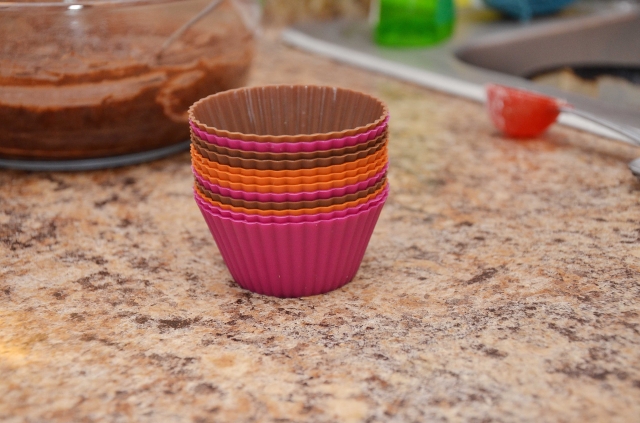 cause they are much easier to clean than a muffin tin and take up less space. 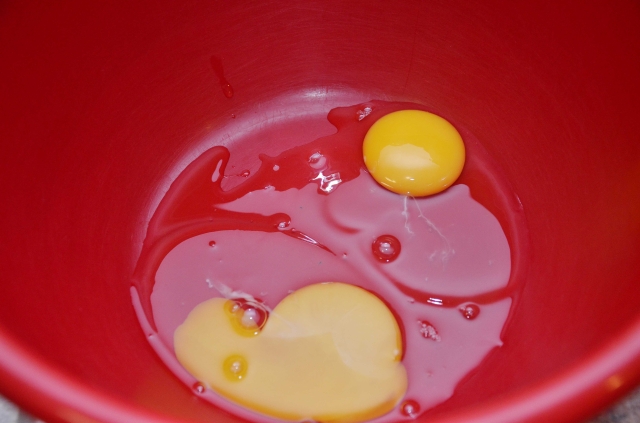 In another bowl, we are making the cheesecake filling starting with 2 eggs. 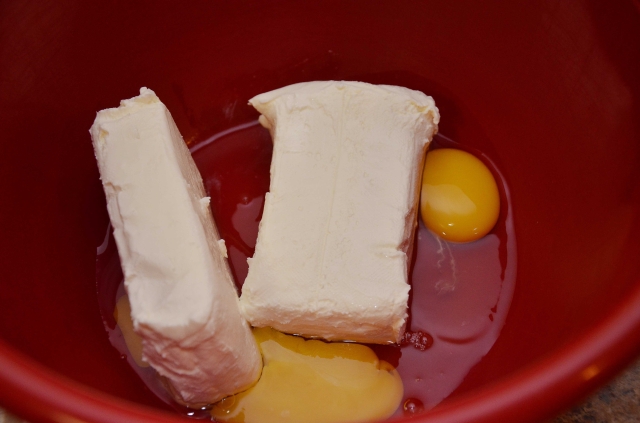 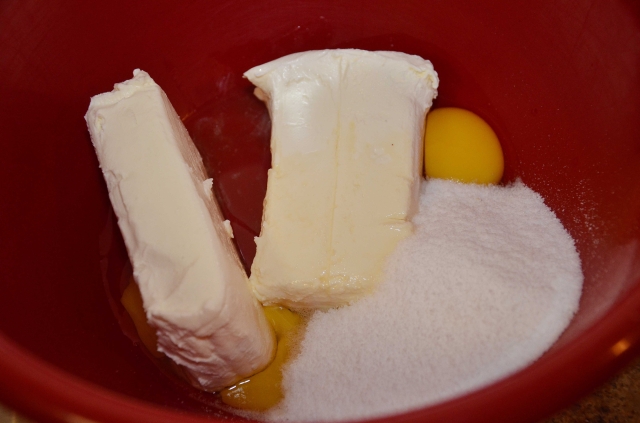 (in cheesecake it doesn’t have any after taste to me.) 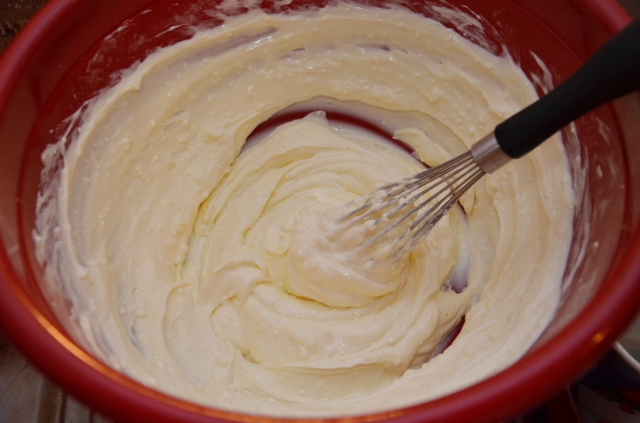 Add a dash of vanilla and mix up. 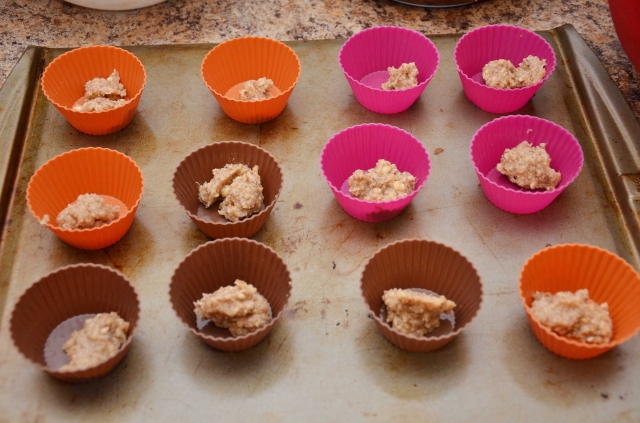 Place a dollop of crust in each of the 12 muffin tins. 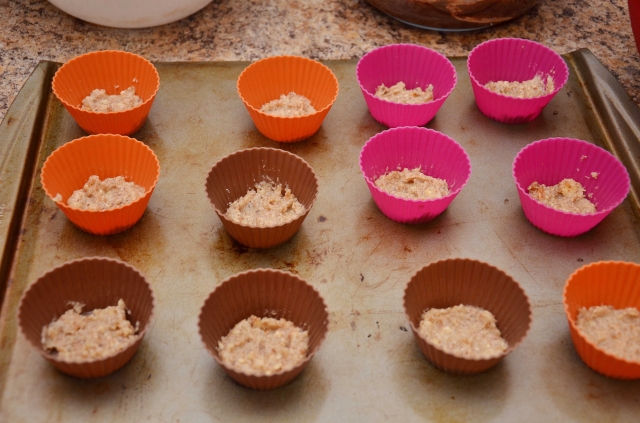 Pat down as best as you can. 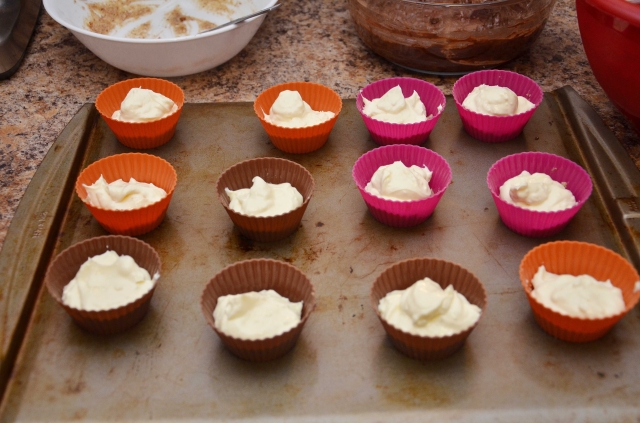 Next add a spoonful of cheesecake filling. 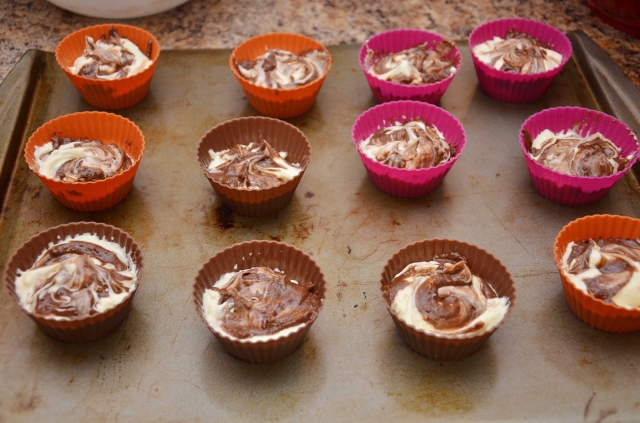 Then a spoon full of brownie mix, and give a small twirl. 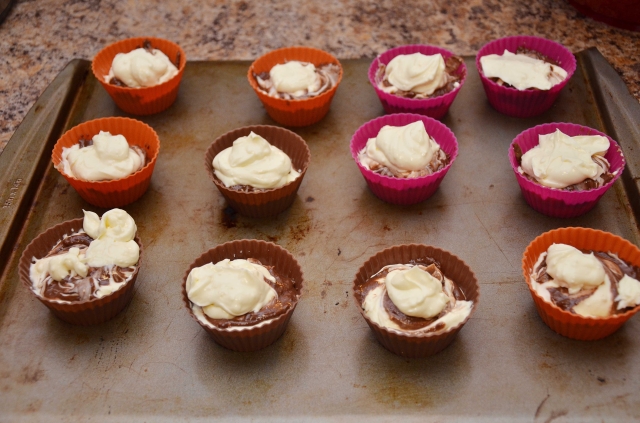 Top each with the remaining cheesecake mixture. 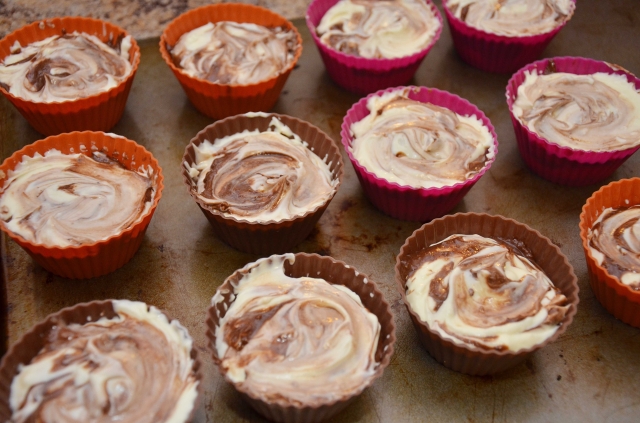 Swirl and level out. 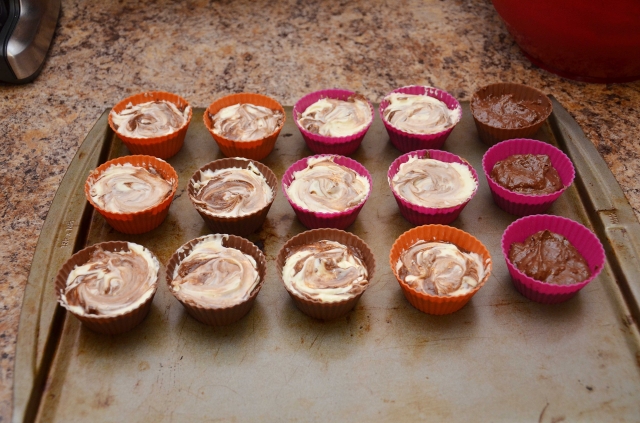 I ended up having a lot of the brownie mixture left over, but below I have halved the recipe since that is closer to what is actually needed. 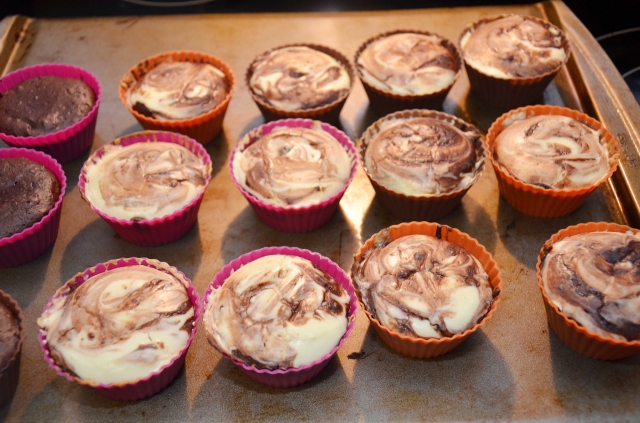 Let them cool cause warm cheesecake is gross. 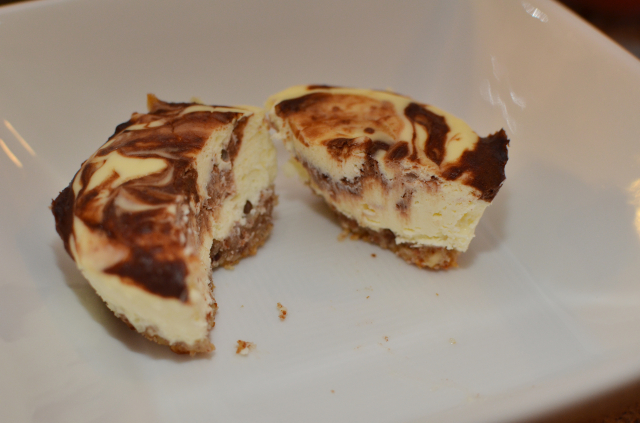 The carb count is around 4 net carbs depending on what sweeteners you add to the recipe. Also this cheesecake recipe is my favorite so if you don’t want to marble it just make the crust and cheesecake filling. When making it plain, I like to add around 1 tablespoon of lemon juice for extra flavor. 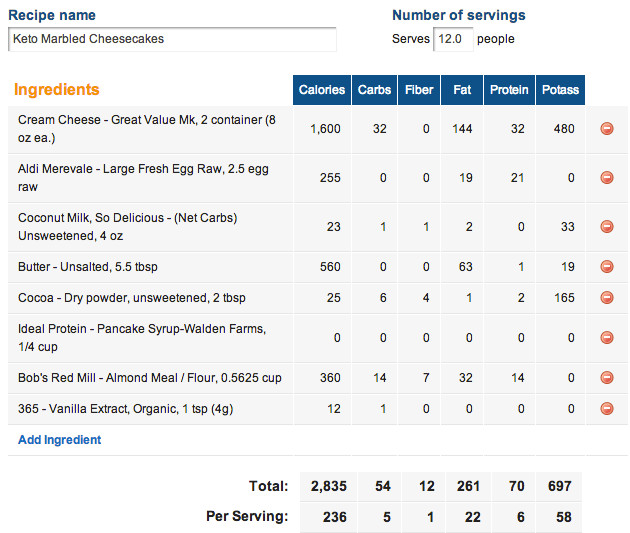 or another sweetener
2 Eggs
1 Teaspoon of Vanilla

if desired
Peanut Butter or Almond Butter if desired

Preheat the oven to 350 Degrees.

For the Crust mix the softened or melted butter with the almond meal and set aside.  In a separate bowl, mix the cream cheese, Splenda

, eggs, and vanilla till smooth and set aside. Then mix the sweetener of choice with egg, butter, cocoa, almond flour, salt, milk, and mix up. Separate the crust mixture into the bottom of 12 Silicone Baking Cups

How many calories/carbs for the sweetener? Splenda has both.

A lot of people don’t “count” the carbs for the sweeteners, but I have added them into the recipe for you. It is showing if using the Splenda in the cheesecake part and truvia in the brownie, to be a total of 7 carbs per piece and 242 calories. Now each different sweetener has different carb/calorie counts depending on which you use. Here is a visual link for you http://imgur.com/GLj56Aq I hope this helps.

I’m making this recipe today for my sister’s birthday! I hecked up a little. I put a whole egg in the brownie mix and it was way too liquid-y. That’s my bad. I also used Truvia, because I didn’t have splenda, and I don’t know how I feel about it. I think the Truvia ended up being way, way too sweet in the brownie mix, and then I only used about 1/4 cup in the cheesecake mix to compensate, and it’s not quite sweet enough? Anyway, thank you so much for this recipe! I’ll know what pitfalls to avoid next time… Any even with my unintended alterations, it’s still totally delicious!

made this this evening. Instructions say 1/2 egg but pic shows a whole egg. I used a whole egg and hope it’s ok. I am wondering if I put it in the frig to chill right after taking it out of the oven? I only keep liquid stevia and xylitol. I used the xylitol and hope it works

Sorry for the confusion, I think the original recipe called for half an egg, but I didn’t mind more fat and was fine with just using a whole egg. So I think it shouldn’t make any difference in taste. I also put mine into the fridge pretty soon after removing them from the oven. The worst I had happen was a little bit of moisture on the tops but that didn’t bother me. About sweeteners, I think anything you have on hand will work fine. Regular sugar affects baking differently than any of the substitute sweeteners, I just used the types I had on hand.

[…] for the food!!! Yummy Keto Marbled Cheesecake!!! I got the original recipe from this blog, and I tweaked it a bit for my family. My hubby is allergic to almonds so I used pecans instead for […]

I love cheesecake & your keto recipes!.